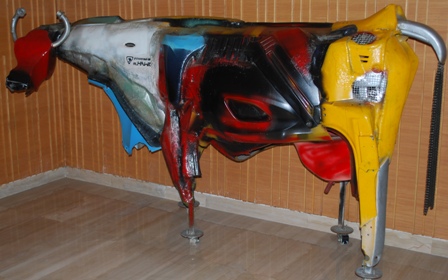 Am just piecing  together this work of METAL ART.

Parts of motorcycles have been welded and then colored to create this AVATAR of THE COW.

Hope many will comment ( moo)  and give their views on this installation at THE METROPOLITAN HOTEL, NEW DELHI.

Lucky its not leaking oil.

Can you make out what it is? 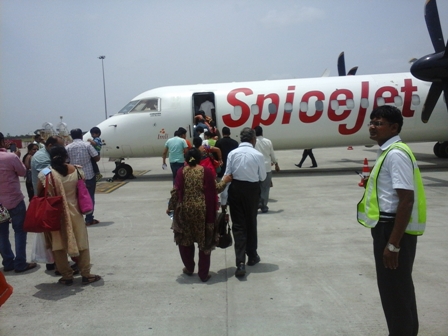 I had been reading horrendous stories ( till 2014)  about cancellation of flights of Spice Jet  and how the airline was on the verge of closure. I thought oh no, another closure after Kingfisher.

Do note the logo above Spicejet: SUN. The seats marked orange are really very comfortable with lots of leg space.

The last two months had me flying SpiceJet for the sole reason of getting the best deals ( read cheapest) on both trips.

I was pleasantly surprised.The Hyderabad- Delhi sector had  these sparkling new aircraft ,wet leased ( yes the crew is Czech too)  from CZECH airlines.

The aircraft had drop down TV screens which show the location of your aircraft on a map.

Things have been changing in the air. Spicejet is on time, new aircraft which  are  sparkling .The Sun has set and somethings brew in the air.

Things still to be improved are the menu , which is really boring.Bland and without any spice.

The article on wildlife written by a realtor in the Inflight magazine would make my English teacher squirm  in his grave.

Getting to the end of the Tail, the bombardiers are great for short hauls like the one I was on,  Hyderabad-Tirupati.